This Rorschach custom is from a set of Watchmen figures that I made for my good friend Andy. His trench coat is a Lizard lab coat dyed brown. Under his coat, he wears a repro Frankenstein suit. His ascot is a basic fabric trim. And a pair of CHiP's gloves and Ben Grimm's hat (Toy Biz) complete the costume. 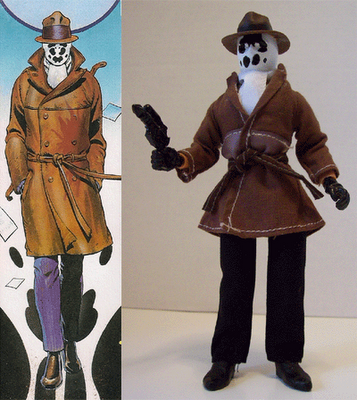 I modified a repro Mego M16 for his grappling gun. The tank is a part from a dollar store WWII airplane model. 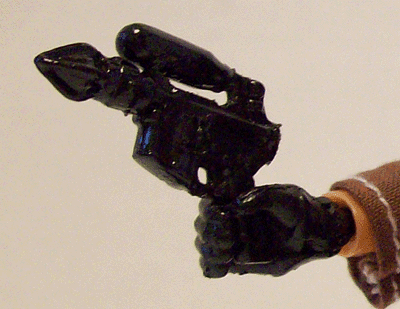 Posted by Markneto at 8:34 PM No comments: 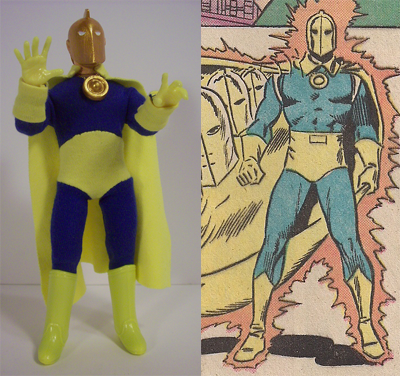 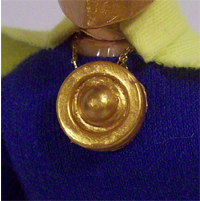 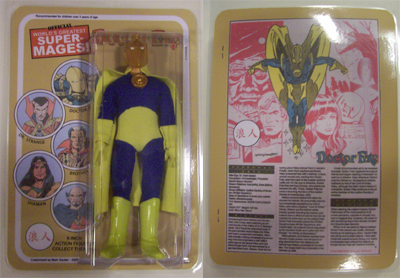 I made this pair of figures as a wedding gift for my good friend Mike (AKA Mike-Vell) and his wife Jen (now Jen-Vell). Mike has always been a huge Mar-Vell fan (hence the nickname), and for a good while I had been contemplating what sort of Mar-Vell Mego to make for him. I had already made him a custom Captain Marvel Hasbro figure (to be featured in a future post), but knew I had to do a Mego. At one point I considered making a set of figures featuring all the characters over the years that have been named Captain Marvel (yes, including the android who split apart by yelling "Split!"). But it proved to be a rather expensive recipe. There are quite a few Captain Marvels out there - and I'm far too much of a purist to leave any of them out.

When Mike and Jen announced their engagement I hit upon the idea of doing a "World's Greatest Super-Couples" two-pack, which would, of course, feature Mar-Vell and his true love Una. 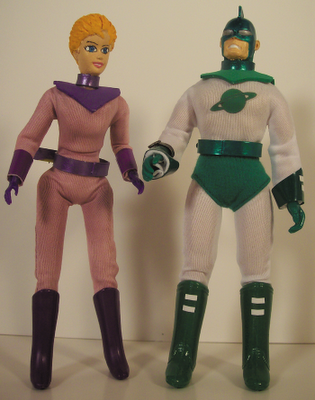 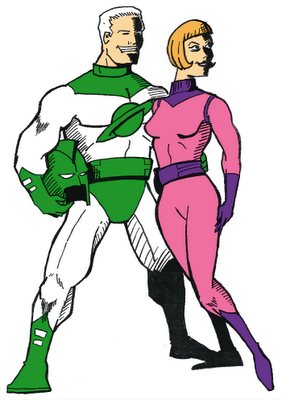 I'm quite pleased with Mar-Vell's uni-beam weapon. It's a nice detail, and a clever use of the CHiP's wrist watch. 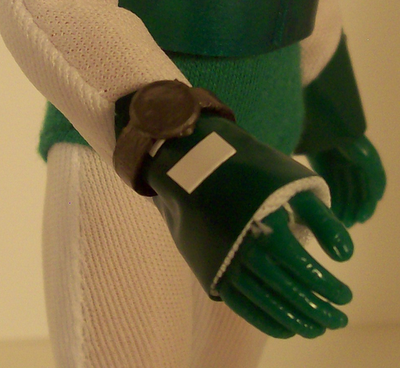 I was unable to find a portrait-style image of Vell and Una together. So I asked my good friend, and cartoonist, Doug Slack if he would create an illustration for the card. He graciously agreed, making the Captain Marvel/Medic Una two-pack my very first custom to feature original artwork. Come to think of it, it's also my first double blister card. 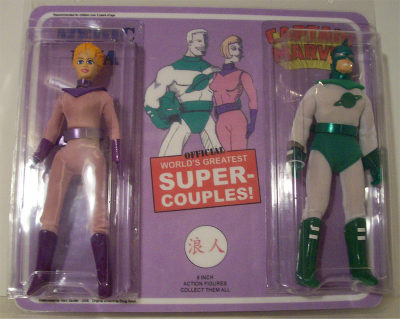 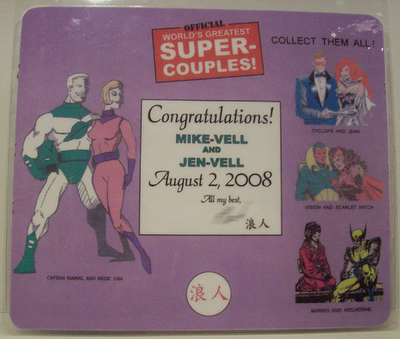 Doug illustrated the cartoon version of me seen all over my blogs. And, he's also the penciller on my webcomic.
Posted by Markneto at 10:51 PM No comments:

I'm usually much more of a purist when it comes to details and continuity. But, without hesitation, I just had to go with Darkstar's post-Champions costume. Its simple and sleek design looks far more super-heroic than the one she wore during her premier (Champions #7) and time with the team. Her original outfit, while nice enough, made her look like she was ready for a night of clubbing instead of crime fighting and adventuring. 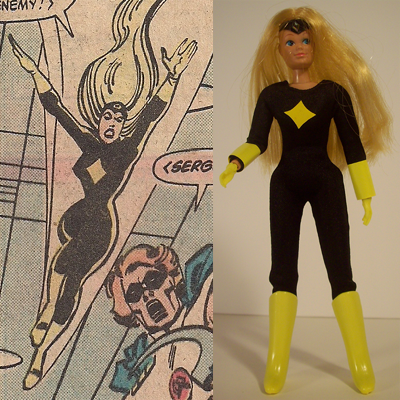 In the role of Laynia Petrovna we have Mego's flexible and fashionable Dinah-Mite. Her costuming is quite simple, consisting of a basic bodysuit (detailed with a little Contact paper) and boots. Her tiara, also crafted from Contact paper, is adorned with a jewel from Michaels Arts and Crafts. 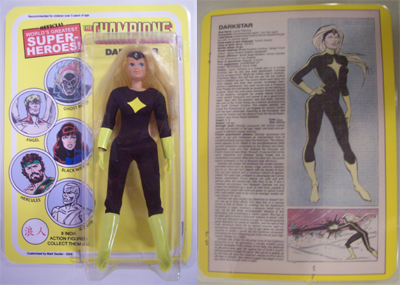 Posted by Markneto at 7:08 PM No comments:

The Grim Ghost is one of Atlas Comics' best characters. And he makes a mighty cool Mego figure. 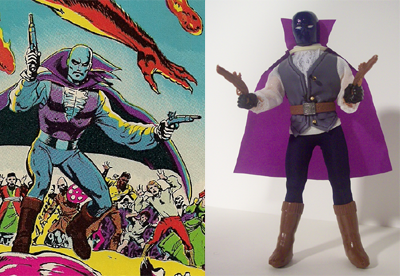 Here Matthew Dunsinane, our roguish highwayman-turned-demonic-bounty hunter, sports a shirt and vest combination courtesy of John Paul Jones from the Heroes of the American Revolution series. The vest is dyed with Rit's purple. It's made of a soft vinyl and easily soaks up the dye. I added a simple lace-like detail to the shirt, which gives it a nice touch of accuracy. His boots are Doc Mego Romulan repros. And his cape is a also Doc Mego. For his his head I chose a Brian Leitner full mask sculpt. I found a nice mid-night blue paint for it that perfectly matches his pants. 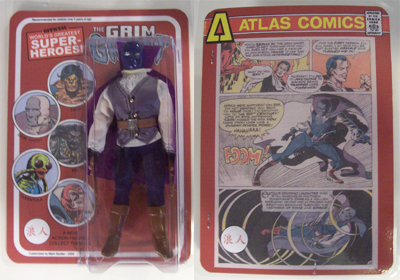 I'd like to offer a hearty thank you to Phil over at the Atlas Archives. A few years ago, back when this site was just an idea, he posted a picture of my Grim Ghost figure. The Atlas archives are a great resource for anyone interested in the history of Atlas/Seaboard Comics.
Posted by Markneto at 12:19 AM No comments:

I'm a huge Japanese culture and history enthusiast, with a special interest in the samurai ethic - Bushido (That's one of the reasons why I adopted the kanji for ronin as my personal emblem). So, when I started customizing Megos back in around 2003, I knew I had to create a set of "World's Greatest Super-Samurai" figures. 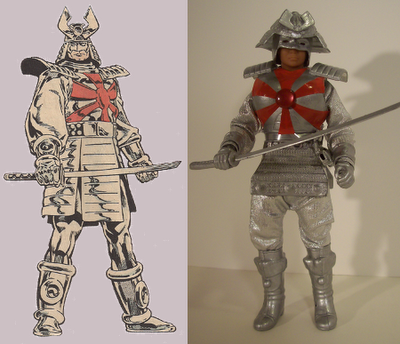 The detail on this figure is quite nice, and it incorporates a number of vintage elements. His helmet combines a Doc Mego repro cowl with a Matchbox Fighting Furies Kung Fu Warrior helmet - what a nice fit. He wields a kung Fu Warrior sword, and wears Kung Fu Warrior boots (there sure are an awful lot of Matchbox elements in this custom Mego). And starring in the role of Kenuichio Harada is... the Japanese Officer (Lion Rock, 1976). Even though the head is in a smaller scale than the body (Dr. Mego, again), it works rather well. 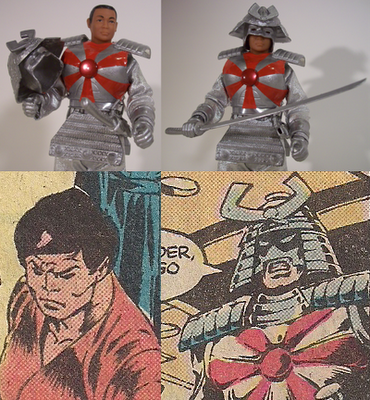 He even has a few shuriken attached to his blister. 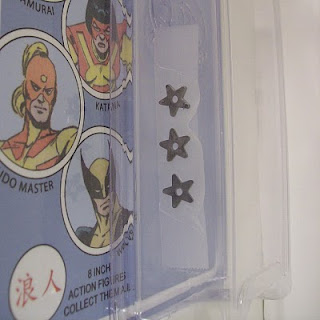 I couldn't be happier with this figure. The Silver Samurai, who has been both hero and villain, is an imposing character with nobility and a commanding presence. This figure totally portrays that spirit. It is one of my earliest and favorite customs. And it turned out so well that it set quite a high standard for the rest of my creations. 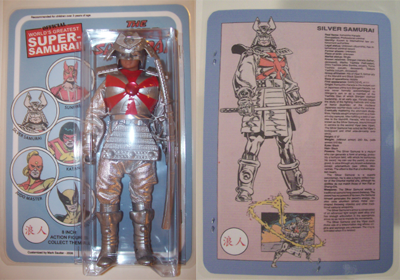 Posted by Markneto at 4:13 PM No comments: